I have now completed the first rendering of Huayna Picchu, (the big peak that dominates the view), refurbished the distant peaks and skyline. Later on I intend to bring the weather in so that clouds pass in front of some of the scene. I have also started clarifying the walls, terraces and buildings. This is fun as I am using memory plus several photographs – the scene I wish to depict does not exist in a single photo.

Incidentally, the Inca were wonderful craftspeople with stone. Machu Picchu was not complete when it was abandoned and you can still see the stone quarry and incomplete buildings. Those buildings that have walls could easily have wooden roof put on and be habitable such is the quality of their work. The stones were worked so that they would fit together perfectly. A good example is shown below (this is part of a wall in Cusco). This marvel is a 14 sided stone which fits so tightly with its neighbours that you could not push a blade of grass into the cracks.

I have added more definition to the distant peaks, though they seem too dark at the moment. I have also started working on Huayna Picchu, the big peak that dominates the view, working top down.

The Incas built a trail up the side of the Huayna Picchu and built temples and terraces on its top. The peak of Huayna Picchu is 2,693 metres (8,835 ft) above sea level, or about 260 metres (850 ft) higher than Machu Picchu. According to local guides, the top of the mountain was the residence for the high priest and the local virgins. Every morning before sunrise, the high priest with a small group would walk to Machu Picchu to signal the coming of the new day.

The word “Picchu” is a hispanicization of the Quechua (ancient language of the Andes peoples) meaning  pyramid.

The river Urubamba almost completely surrounds Huayna Picchu apart from a narrow ridge leading from Machu Picchu mountain; the Inca ruins sit between the two peaks with extremely steep slopes on both sides down to the river. 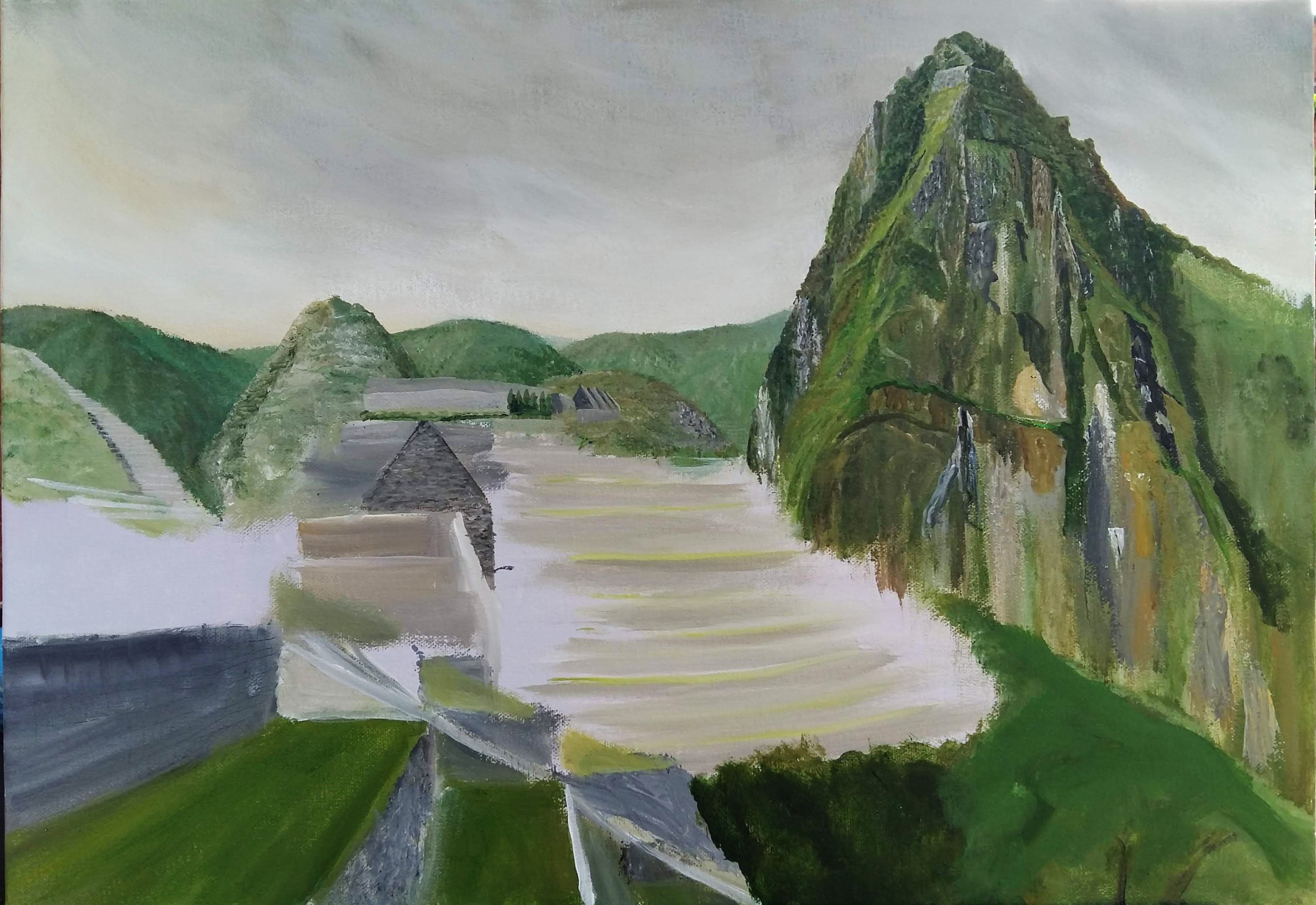 My daughter-in-law, Lissete, comes from Lima, Peru. We have naturally visited this amazing country and have many fantastic memories and photos.

I have hesitated to paint the iconic Machu Picchu site, as even the many photographs I have do not do the place justice. The site sits above jaw-dropping cliffs down to the Urubamba river and has a calm, watchful atmosphere and an air of mystery. The Spanish Conquistadors did not find it when they invaded and there are many theories as to its purpose. One I like is that it was an agricultural research station – each terrace has it’s own microclimate.

I have decided to combine some of the detail I photographed in the morning when the weather was fine with the sombre shadows of the rain clouds we encountered in the afternoon.

This is the first stage – I have started to block out the shapes in the picture. That has already allowed me to see that some of the shapes are not quite right. I am using several photos in addition to my memory – so the final result will not exactly match any one of the photos! 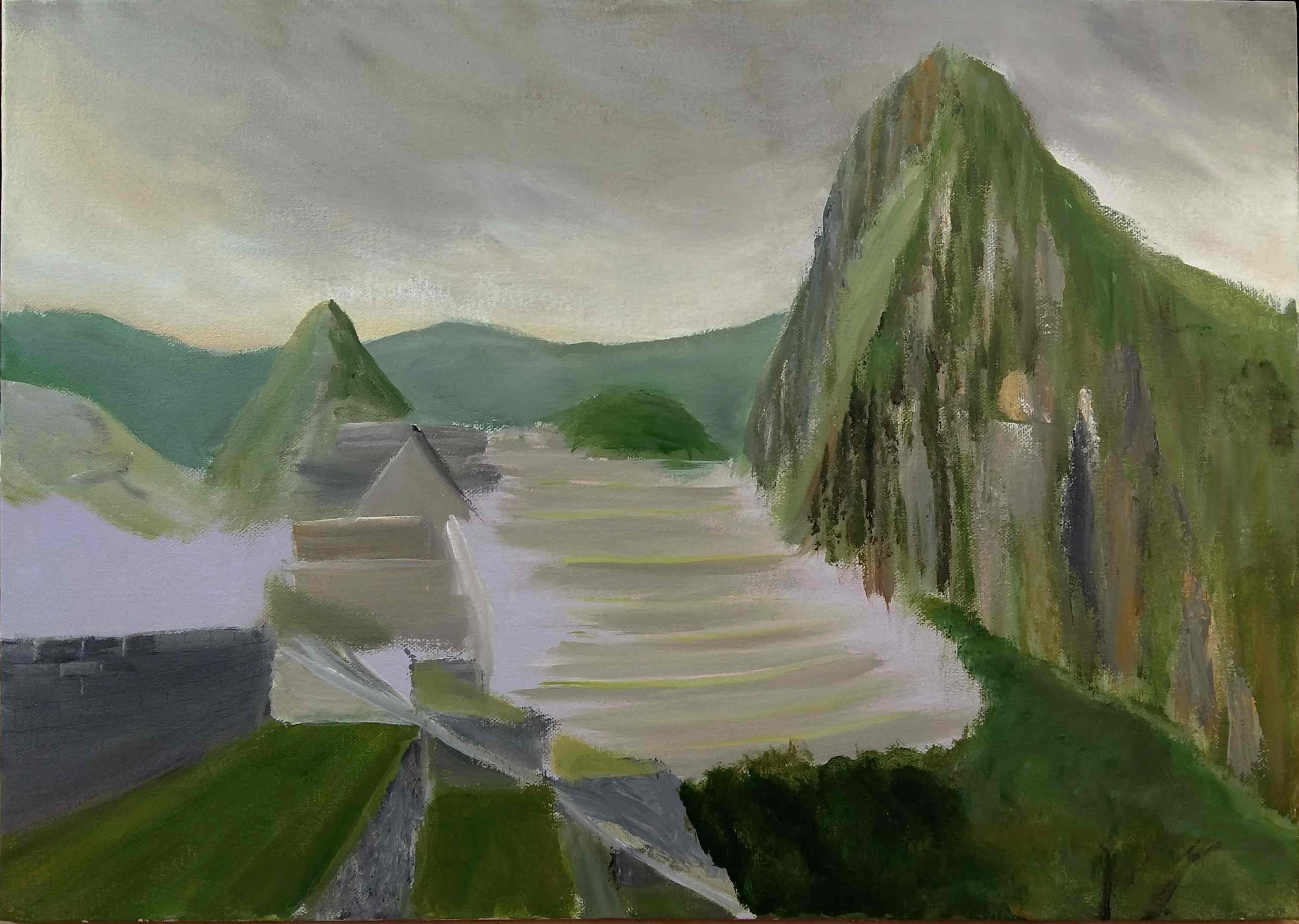 This site is primarily concerned with making images of my artwork available for all to see.
The site is currently under development, so please bear with me.

We use cookies to ensure that we give you the best experience on our website. If you continue to use this site we will assume that you are happy with it.Ok