Whilst staying in Voiron with our french twinning hosts, Marie-Noelle and Jean-Francois, we had the opportunity to participate in a local artistic trip to Crémieu, some 40km east of Lyon.

We are members of the Droitwich Spa French Twinning Group, which links us to the town of Voiron which lies between Lyon and Grenoble, (Voiron is known for the production of Chartreuse liqueur). As you may know, our town Twinning visits include events organised by the local twinning group. They also allow time for hosts to share their area with their visitors. These often provide a deeper immersion into French culture.

Thus, it was that on a Saturday morning in late April, bright and early (well, early) we drove with our host, Marie Noelle, to the nearby town of Châbons for a trip with a local group called “Sur le pas de Jongkind”, a group who share cultural interests. There we joined a coach full of people of which we only knew Marie-Noelle. She sat slightly apart from us so we were forced to speak in French with the others as few had any English. The group seemed pleased to have us with them and talked to us when they can and kindly helped correct our understanding of the French language.

The coach first took us to Crémieu, a small town to the east of Lyon. On exiting the coach, we were all given pastries and buns. The “Isle de Crémieu”, is a diverse countryside composed of hills, plateaux, plains and valleys, dotted with pretty towns and villages that sits to the south of a bend of the Rhône river. In the nineteenth century a number of landscape artists decided to paint from nature and based themselves in this area.

We were guided around the ancient streets of Crémieu to see the sites chosen as subjects for paintings. We were shown reproductions of the pictures to compare with the scene today. One was of a narrow street, near the church painted by François-Auguste Ravier. 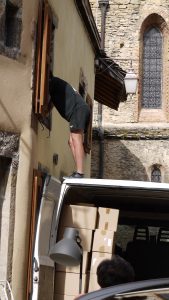 The view was made a little more interesting by removals taking place at an old house. The staircase must have been a problem as furniture was being handed out of an upstairs window to a man standing on top of a van.

After stopping on the far side of town for photos, we visited various sites in the area that had been painted by artists such as Corot, Daubigny, Tassier and Claudel.

In the paintings below, the étang de Gilieu Siccieu fed nearby mills. Today the mills are ruined, the étang is no longer maintained and has almost disappeared and the landscape changed dramatically as a result. 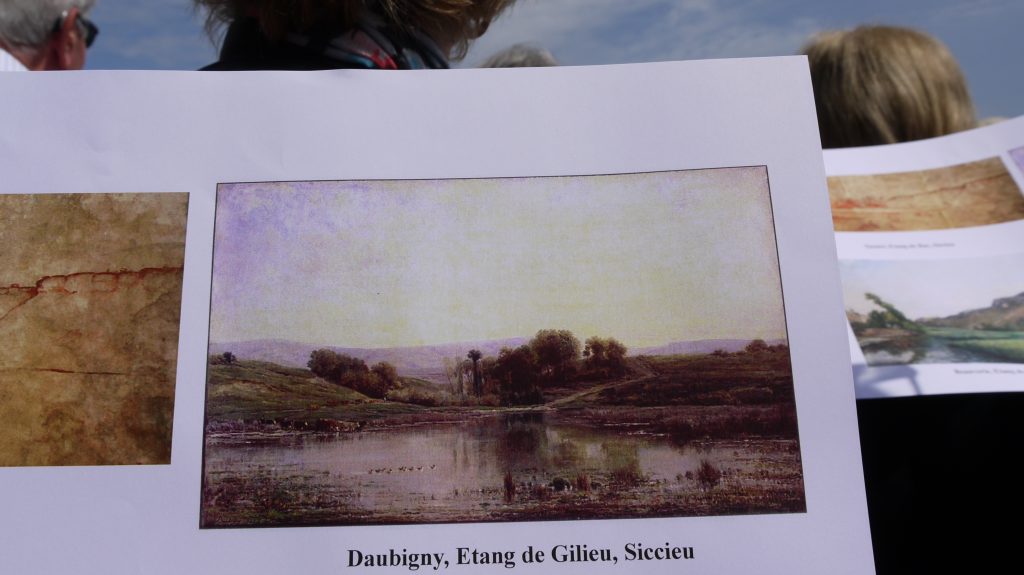 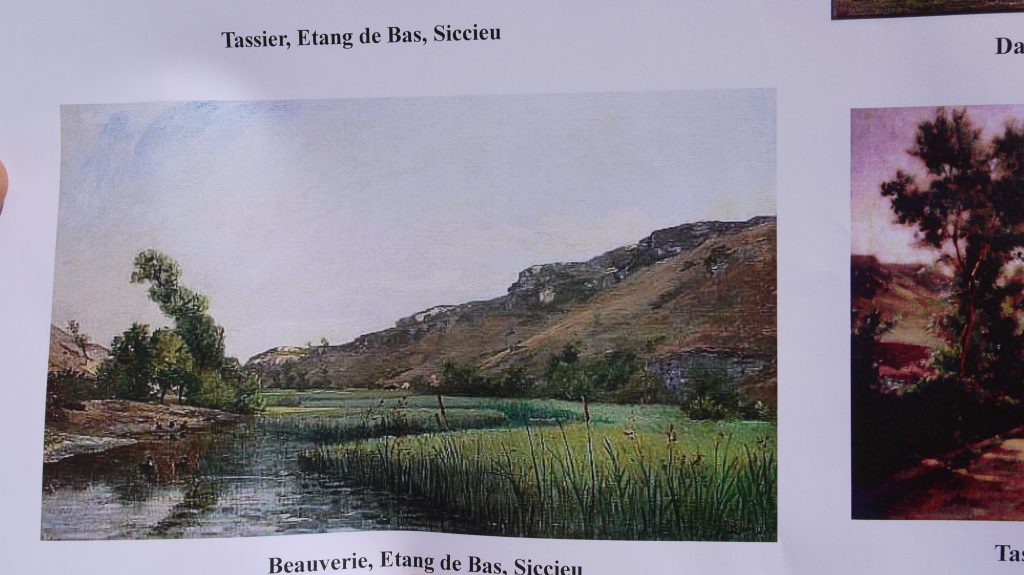 These paintings made contrasted with the view today:

And again in Optivoz we saw artist’s pictures on wall of restaurant “Auberge de peintres”. We were also taken to see the remains of the mill and the sluices for the mill ponds 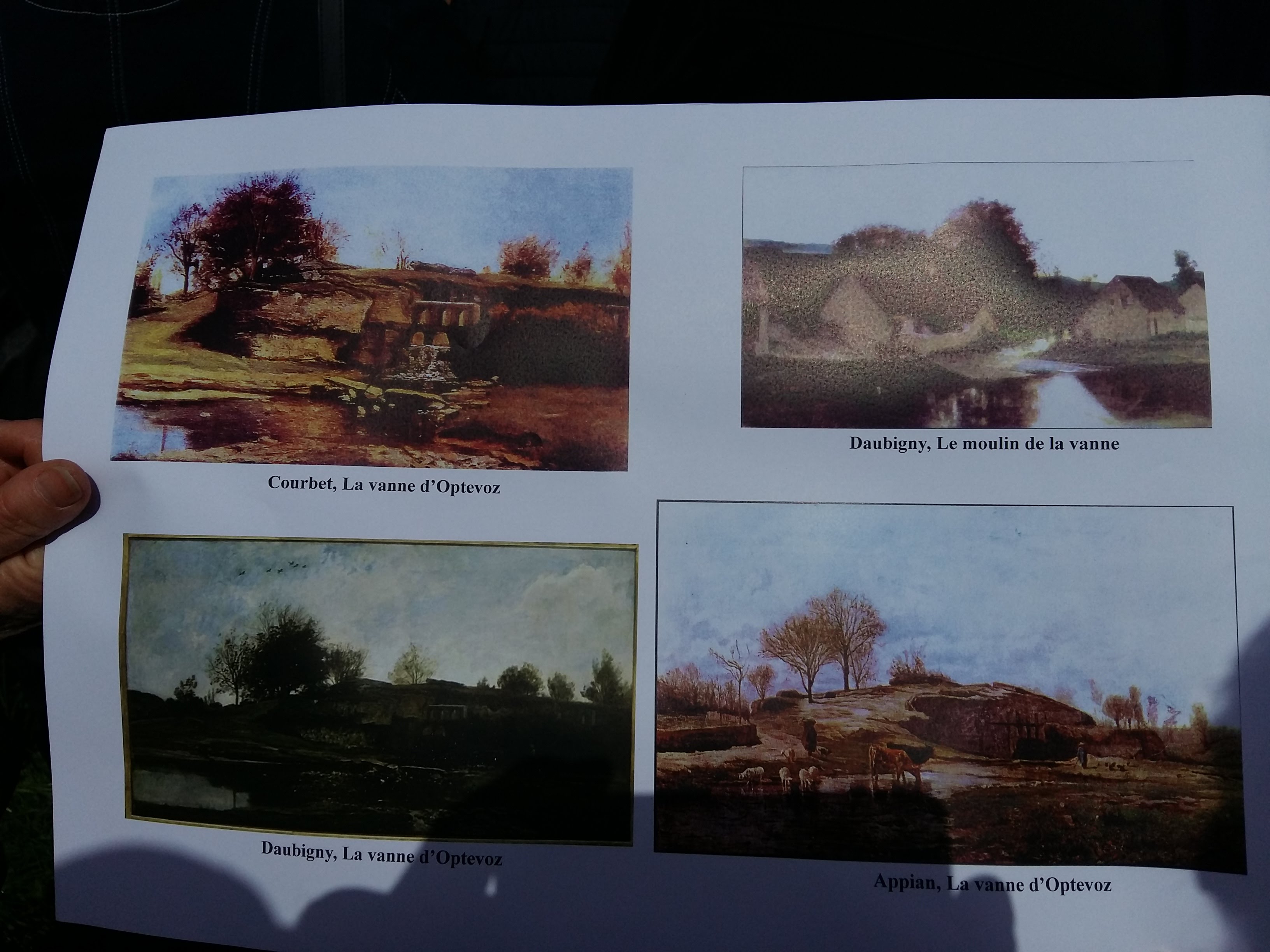 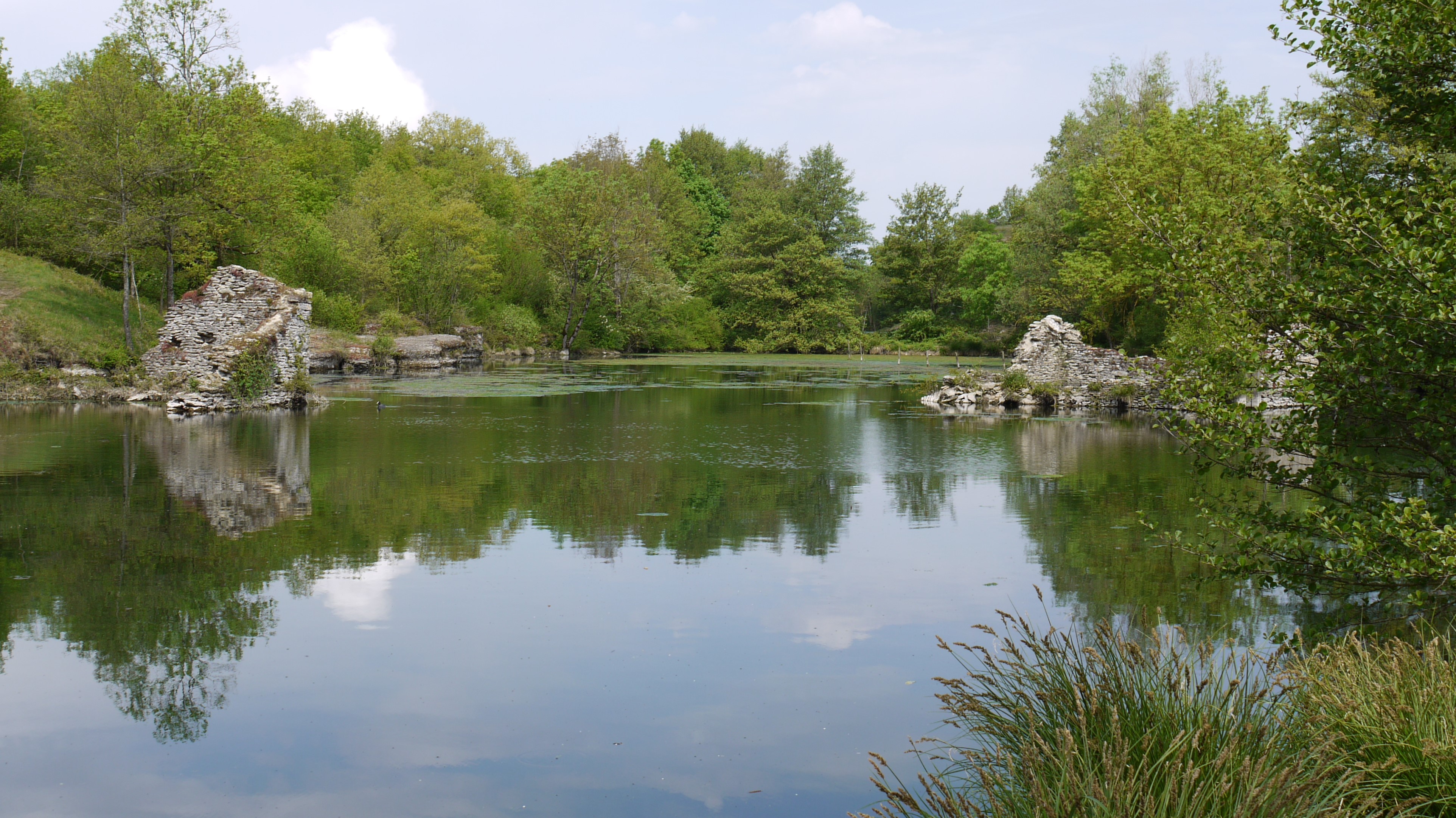 We also visited Brangues which is associated with writers Stendahl & Paul Claudel. We ended at Corbelin for drinks and cakes (sanguines? – a local speciality) before returning.

It was a long day, but very interesting and rewarding.